The time period of an allocation when it is granted is a reference value, used for the calculation of the average which is applied to the actual period during which the resources are available. This means that if the allocation period was a year and the clusters were down for a week of maintenance, a research group would not be entitled to an additional week of resource usage. Equally so, if the allocation period were to be extended by a month, research groups affected by such a change would not see their resource access diminish during this month.

Information on the usage of compute resources by your groups can be found by logging into the CCDB and navigating to My Account > View Group Usage. 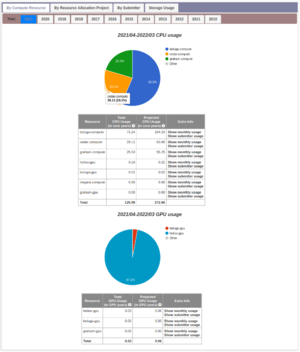 CPU and GPU core year values are calculated based on the quantity of the resources allocated to jobs on the clusters. It is important to note that the values summarized in these pages do not represent core-equivalent measures such that, in the case of large memory jobs, the usage values will not match the cluster scheduler’s representation of the account usage. 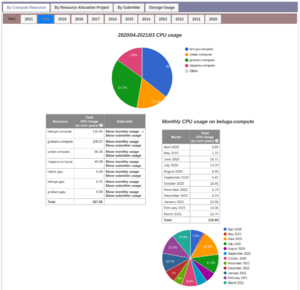 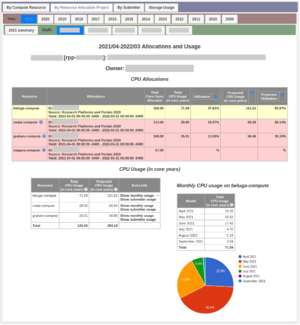 Under this tab, a third tag bar displays the RAPIs (Resource Allocation Project Identifiers) for the selected allocation year. The tables contain detailed information for each allocation project and the resources used by the projects on all of the clusters. The top of the page summarizes information such as the account name (e.g. def-, rrg- or rpp-*, etc), the project title and ownership, as well as allocation and usage summaries. 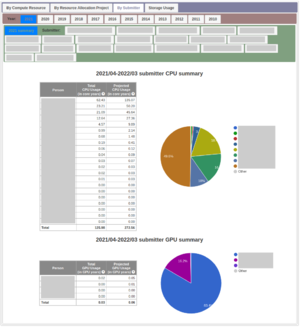 CPU and GPU usage by submitter

Usage can also be displayed grouped by the users that submitted jobs from within the resource allocation projects (group accounts). The view shows the usage for each user aggregated across systems. Selecting from the list of users will display that user’s usage broken down by cluster. Like the group summaries, these user summaries can then be broken down monthly by clicking the Show monthly usage link of the Extra Info column of the CPU/GPU Usage (in core/GPU] years) table for the specific Resource row.

What happens if my group overuses my CPU or GPU allocation?[edit]

Nothing bad. Your CPU or GPU allocation is a target level, i.e., a target number of CPUs or GPUs. If you have jobs waiting to run, and competing demand is low enough, then the scheduler may allow more of your jobs to run than your target level. The only consequence of this is that succeeding jobs of yours may have lower priority for a time while the scheduler prioritizes other groups which were below their target. You are not prevented from submitting or running new jobs, and the time-average of your usage should still be close to your target, that is, your allocation.

It is even possible that you could end a month or even a year having run more work than your allocation would seem to allow, although this is unlikely given the demand on our resources.

Compute-related resources granted by core-year and GPU-year allocations require research groups to submit what are referred to as “jobs” to a “scheduler”. A job is a combination of a computer program (an application) and a list of resources that the application is expected to use. The scheduler is a program that calculates the priority of each job submitted and provides the needed resources based on the priority of each job and the available resources.

The scheduler uses prioritization algorithms to meet the allocation targets of all groups and it is based on a research group’s recent usage of the system as compared to their allocated usage on that system. The past of the allocation period is taken into account but the most weight is put on recent usage (or non-usage). The point of this is to allow a research group that matches their actual usage with their allocated amounts to operate roughly continuously at that level. This smooths resource usage over time across all groups and resources, allowing for it to be theoretically possible for all research groups to hit their allocation targets.

How does resource use affect priority?[edit]

The most common example of unused cores contributing to a priority calculation occurs when a submitted job requests multiple cores but uses fewer cores than requested when run. The usage that will affect the priority of future jobs is the number of cores requested, not the number of cores the application actually used. This is because the unused cores were unavailable to others to use during the job.

Another common case is when a job requests memory beyond what is associated with the cores requested. If a cluster that has 4GB of memory associated with each core receives a job request for only a single core but 8GB of memory, then the job will be deemed to have used two cores. This is because other researchers were effectively prevented from using the second core because there was no memory available for it.

The details of how resources are accounted for require a sound understanding of the core equivalent concept, which is discussed below.[1]

What is a core equivalent and how is it used by the scheduler?[edit]

Allocation target tracking is straightforward when requests to use resources on the clusters are made entirely of core and memory amounts that can be portioned only into complete equivalent cores. Things become more complicated when jobs request portions of a core equivalent because it is possible to have many points counted against a research group’s allocation, even when they are using only portions of core equivalents. In practice, the method used by Compute Canada to account for system usage solves problems about fairness and perceptions of fairness but unfortunately the method is not initially intuitive.

Research groups are charged for the maximum number of core equivalents they take from the resources. Assuming a core equivalent of 1 core and 4GB of memory:

What is a GPU equivalent and how is it used by the scheduler?[edit]