Managing your cloud resources with OpenStack

From CC Doc
(Redirected from OpenStack)
Jump to navigation Jump to search
Other languages:
English • ‎français

OpenStack is the software suite used on our clouds to control hardware resources such as computers, storage and networking. It allows the creation and management of virtual machines ("VMs", or "instances"), which act like separate individual machines, by emulation in software. This allows complete control over the computing environment, from choosing an operating system to software installation and configuration. Diverse use cases are supported, from hosting websites to creating virtual clusters. More documentation on OpenStack can be found at the OpenStack website.

This page describes how to perform common tasks encountered while working with OpenStack. It is assumed that you have already read Cloud Quick Start and understand the basic operations of launching and connecting to a VM. Most tasks can be performed using either the dashboard (as described below), the OpenStack Command Line Client, or a tool called Terraform; however, some tasks require using command line tools, for example sharing an image with another project.

Working with the dashboard

OpenStack projects group VMs together and provide a quota out of which VMs and related resources can be created. A project is unique to a particular cloud. All accounts which are members of a project have the same level of permissions, meaning anyone can create or delete a VM within a project if they are a member. You can view the projects you are a member of by logging into an OpenStack dashboard for the clouds you have access to (see using the cloud for a list of cloud URLs). The active project name will be displayed in the top left of the dashboard, to the right of the cloud logo. If you are a member of more than one project, you can switch between active projects by clicking on the drop-down menu and selecting the project's name.

Projects can be thought of as owned by primary investigators (PIs) and new projects and quota adjustments can only be requested by PIs. In addition, request for access to an existing project must be confirmed by the PI owning the project.

Please see this page for more information about creating and managing storage volumes.

Please see this page for more information about managing certain characteristics of your VMs in the Dashboard.

You can define multiple security groups and a VM can belong to more than one security group. When deciding on how to manage your security groups and rules, think carefully about what needs to be accessed and who needs to access it. Strive to minimize the IP addresses and ports in your Ingress rules. For example, if you will always be connecting to your VM via SSH from the same computer with a static IP, it makes sense to allow SSH access only from that IP. To specify the allowed IP or IP range, use the CIDR box (use this web-based tool for converting IP ranges to CIDR rules). Further, if you only need to connect to one VM via SSH from the outside and then can use that as a gateway to any other cloud VMs, it makes sense to put the SSH rule in a separate security group and add that group only to the gateway VM. However, you will also need to ensure your SSH keys are configured correctly to allow you to use SSH between VMs (see SSH Keys). In addition to CIDR, security rules can be limited within a project using security groups. For example, you can configure a security rule for a VM in your project running a MySQL Database to be accessible from other VMs in the default security group.

The security groups a VM belongs to can be chosen when it is created on the Launch Instance with the Security Groups option, or after the VM has been launched by selecting Edit Security Groups from the drop-down menu of actions for the VM on the Project->Compute->Instances page.

CIDR stands for Classless Inter-Domain Routing and is a standardized way of defining IP ranges (see also this Wikipedia page on CIDR).

The first time your instance is launched, you can customize it using CloudInit. This can be done either 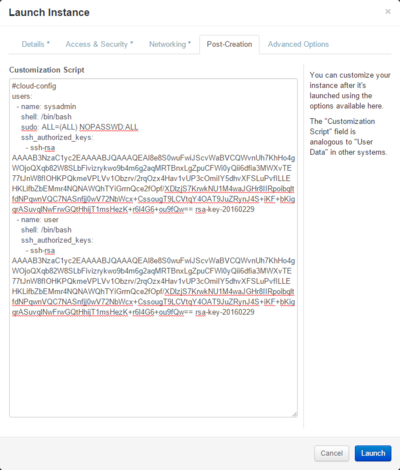 Alternatively, you can do this during the creation of a VM using CloudInit. The following CloudInit script adds two users gretzky and lemieux with and without sudo permissions respectively.

For more about the YAML format used by CloudInit, see YAML Preview. Note that YAML is very picky about white space formatting, so that there must be a space after the "-" before your public key string. Also, this configuration overwrites the default user that is added when no CloudInit script is specified, so the users listed in this configuration script will be the only users on the newly created VM. It is therefore vital to have at least one user with sudo permission. More users can be added by simply including more - name: username sections.

If you wish to preserve the default user created by the distribution (users debian, centos, ubuntu, etc.), use the following form:

After the VM has finished spawning, look at the log to ensure that the public keys have been added correctly for those users. The log can be found by clicking on the name of the instance on the "Compute->Instances" panel and then selecting the "log" tab. The log should show something like this:

Once this is done, users can log into the VM with their private keys as usual (see SSH Keys).